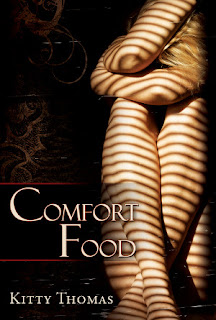 Emily Vargas has been taken captive. As part of his conditioning methods, her captor refuses to speak to her, knowing how much she craves human contact. He's far too beautiful to be a monster. Combined with his lack of violence toward her, this has her walking a fine line at the edge of sanity. Told in the first person from Emily's perspective, Comfort Food explores what happens when all expectations of pleasure and pain are turned upside down, as whips become comfort and chicken soup becomes punishment.

Lovers of The dark duet (Captive in the Dark, Seduced in the dark) by C.J. Roberts and Consequences series by Aleatha Romig

This is definitely not a light read and if you are against Captive/Captor/Stockholm Syndrome/abuse/rape/HEA  type of books, go read The Secret Garden or The Little Princess or something that doesn't resemble to this book.

I must say that the situation the writer places the main character in quite realistic. I mean, this could happen to anyone. I have read several reviews of people that disliked this book but in my POV it was good, arousing even because you can say: "Oh, this girl is stupid, resist, don´t give in!" but lets be honest, no one know how he/she will react in a situation like this. Even if you struggle to comply and resist and say in your mind: "I will make him think I trust him, he´s everything for me and bla bla bla" I think you end up giving in. That´s what the Stockholm Syndrome/Captor relationship is about and Kitty Thomas portrayed perfectly and she also shows up that thin line between being held captive and giving in to survive, love and inner peace.

This is a well written story and I could see every single detail in my head like if I were living it. By the end of the book I had the following questions: Would I be doing everything he wants in order to survive? Would I really fake and don´t break down? Would I behave like her? I analysed the whole captive/captor situation about Emily and I was actually turned on. I have to say it looks appealing to be kidnapped and taken care even if I know real life captivity don´t give that luxury LOL but as the same story says: One thing is reading these type of books and be turned on and other completely different to be actually kidnapped and be used as a sexual slave. I have to say I really, really liked this story about Master & Emily and would have liked it to be more story for them instead of short 192 pages but it´s OK

I have noticed that I personally don´t care how dark or twisted the story is..if it has an inevitable HEA between the main characters :D