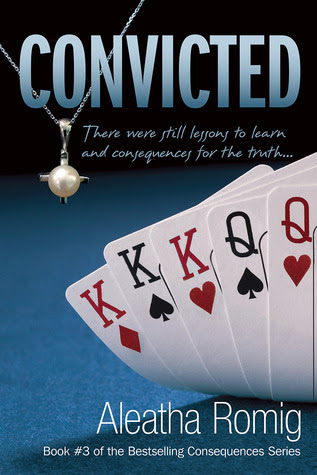 You must stick to your CONVICTION, but be ready to abandon your assumptions - Denis Waitley
Book #3 of the Consequences Series—
There were still lessons to learn and consequences for the truth!
When Claire Nichols met Anthony Rawlings, she didn’t know they had a past, or that he had plans for her future. Over time, the role of teacher changed—games became reality—and domination turned to desire. Despite an insurmountable history, Claire and Tony found their way back to one another.
Just when they seemed to have it all—love, respect, and the promise of a family—the game master exposed the truth. Claire’s world once again spun out of control. Unwilling to allow her child to suffer the consequences of an old vendetta, Claire fled...
At one time, Claire was held captive in an opulent mansion—then her incarceration was a cell inside a state penitentiary. Was her new prison—a tropical island—truly less lonely? Perhaps that was the game master’s plan, all along?
Who will save Claire from her oldest nightmare and her newest reality? Will it be Tony? Can he forgive her for leaving him—again? Harry? Will he utilize previously unknown connections to save the woman who infiltrates his thoughts? Maybe Phil? Will his devotion in keeping Claire and her child safe be rewarded?
As the cards are played—sins of the past, innocent victims, and truths are revealed. With compartmentalization no longer an option, is the reality too much? Could there be an even worse isolation?
With the game master dealing from a stacked deck, can this new high-stakes game possibly be won?
When it’s all over and their cards are on the table—SOME will discover their bets were too high—they have nothing left to lose—ALL will learn the crucial lesson—the most important rule—there are CONSEQUENCES for the TRUTH!
Aleatha Romig’s CONVICTED!

Disclaimer: Apparently we are getting this one in October yeii.!!! Yes.! Aleatha posted on Facebook that she is expecting a release in October. Lets hope we don't get any delays. I just wish that it could arrive sooner... :(

Below there´s a link for the final teaser of Consequences. I recommend to wait until the book is published or I can assure you, you´ll be fucking pissed at the end of this one. Remember not to make assumptions my friends ;) . Enjoy.!

Third in the CONSEQUENCES series... The saga of Anthony Rawlings, Claire Nichols, Derek and Sophia Burke, Catherine London and a host of wonderful characters will return to -- answer questions as Aleatha Romig determines fates, futures, and forevers...


You must stick to your CONVICTION,but be ready to abandon your assumptions - Denis Waitley


So I was stalking Aleatha Romig´s blog as I always do every 2-4 weeks to check up on updates about this installment and I saw the following question to discuss with book clubs:

20.  Many readers have found solace knowing that Claire is happy in the "Afterward". Who are the possibilities for her "husband"? Which man do you believe is with her?

I´m going to sound very "Hit me but don't leave me" but... Common! we all know Claire is going to end up with Tony. Not Harry and NOT even Phil(ugh). How do I know that? Because she loves that man. Period. Even after the verbal, emotional, physical, sexual and psychological abuse, she was still there. After she was released from prison, even when she told everyone she hated him and wanted revenge there was a part inside her that  still loved him and missed him.

If Caleb and Olivia had their HEA in The Dark Duet and their story was more fucked up than this one why can´t Tony and Claire be together. They have grown so much in this two books.

Harry is H-O-T cute guy and I don´t really think Claire will choose him over Tony because she is carrying Tony´s child and she went to all that trouble at the end of Truth to protect her baby. Tony is also Alpha male and Harry is not and they don´t share that intense passion. It was also revealed to her that Catherine is the master mind behind all the tragedies in her life or at least that´s what I think. I don´t really sense Tony killing all those people and Claire will do whatever it takes to protect her family (Tony included).

You know what I hate the most..?! That Mrs. Romig is not giving anything away, not even in the synopsis of the book. Damn her!!! I hate her..and love her at the same time :(

One thing is for sure. They don't end up together. I WILL CRY.. YEAH.!! THAT´S RIGHT I WILL CRY LOL Cause apparently that´s the only thing I will be able to do after getting my heart broken.

WHAT A RIDE! THANK YOU!! I CAN FINALLY WORK IN PEACE...
"I suppose I should start in the beginning - March 2010. No, that wasn't when I was born. It was when I began to live."
This is one of a few books I could give more than 5 stars. Questions from book 1 and 2 were finally answered in this one. I love twisted love stories and I have to admit I dreaded reading this final installment because I wasn't sure how it was going to end.

The whole book you are going back a forth from when Truth ended to 2016. YES! 2016 as in present time. When we read about 2013 when Truth ended we see Tony but in 2016 no one talks about him. We don't know where he is and you fear the worst the whole time. The answer to why Tony is not present in 2016 is heartbreaking! I almost had a coronary. I was going crazy trying to put everything together. Impressions and assumptions are deceiving. Yes! Everything we thought we knew from book Cons and Truth changes in Convicted. People we got to know and grew in our hearts were deceitful. All the teams we were betting on were a complete lie. I didn't expect those turn of events. Seriously...

This is a very complex story and not just the plot but the way it is built. It gives you eye opening revelations. There are a lot of characters involved and several POV's as well. I had to re read "Consequences" and was about to do the same with "Truth" but Convicted was released yesterday and I couldn't wait to read it. before 90% or so of this book I was in tears when Claire is writing in her journal about how the story ended. I almost had a HEART ATTACK ALEATHA. Thank you very much!I screamed: WHAT?!! NOOOOOOOOOOO!!! internally obviously because I was at work and I could be fired if I get caught reading LOL.
Tony confesses everything he had done to Claire and my heart broke in his POV remembering how he abducted Claire it was horrible to read and imagine what he had done to her while she was drugged I think Aleatha gave us that as an out to stop loving Tony but it didn't work. Bad people can get redeemed.

"Theirs was a long, complicated story with a monster and a knight. What made their story unique was that these two players were the same person."
I'm Team Tony since Consequences no matter what he had done, except at the end of it of course, but I really enjoyed him groveling for forgiveness. We gave him too much credit for all the lives that were altered with "his supposedly actions". Truth is, the only life he played with was Claire by having her imprisoned in his house and then in jail.

"Some would argue that a foundation built on kidnapping, isolation, violence, and yes - even rape - would never stand. I must disagree. We lived through hell and came out the other side."
I really hated Emily, I never liked her since "Cons". I'm not defending Tony but she changed her personality while he controlled her, but even if her change wasn't because of Tony's threads, Emily was such a pain in the ass. Always criticizing why her hair was blond, why she was so skinny, etc etc, etc. Up until the end, she just wanted to nail Tony. The book Meredith published gave him a bad image. Of course he deserved it and also not being trusted but she just isolated Claire in a mental facility not allowing [ visitors and people reminding her of Nichol and Tony. I kind of felt that she envied Claire and wanted to keep her sick in that place. I also thought that she wanted to keep her daughter and its benefits. She just wanted to do what she "thought" was right because doctors said her head injuries might have affected her "poor decisions" in the past. Seriously she's a bitch. Brent cleared everything about the whole Claire and Tony wanting to kill Catherine and Even though  Claire was lucid and talking and wanting to see people she denied her rights. She though she was the mother fucking hen and she could control her every move even when she knew at the end Tony was not the reason she was sick. Even john admits he saved them. Thanks to Meredith  Claire came back from her "memories"  and not thanks to her stupid sister.
"They say I'm a victim of abuse, and as such, I don't understand the difference between love and applied behavior. How can that be true? If I don't know my own feelings, how can anyone else?"
Amber and Harry what can I say about those two. The revelations I got about those two while reading gave me some WTF moments. They are siblings and both deceiving  of course. Yes! I never thought Harry would have been playing Claire in Truth all along. He looked so sincere and loving. From super supportive man to undercover FBI Agent?! WTF. I won't even go there and explain the whole shit about them because truth is I HATE THEM and am glad they are out of the picture. I just can't believe what he did to Liz. Poor woman I wouldn't have forgiven him so easily. He's the kind of man that sees ass and will follow it without question. ASSHOLE. Amber, well she was  a gold digging selfish bitch.
It was painful and heartbreaking how Sophia and Derek story ended. Their love was glitch-free. They could survive everything. But that was just tragic. They deserved better.

For Tony and Claire to have a somewhat wide age difference made them more real to me. As she explained they have went through hell and back. What they lived, experienced, felt and lost over time was not something they could forget or take lightly. They spend years apart from each other one when she was in jail and then when she was in the mental facility. If "sickness"(Stockholm Syndrome) was the case she would have been "cured" and not mourn for her long lost love. Just saying... sigh* They were the only ones able to decide their own fate *sigh* *sigh* People where still gonna talk about them.

Again our minds get played by Aleatha and I loved it. I can't wait to read "Behind his eyes".
“I fell in love with you while you were supposed to be my prisoner; however, I’ve loved you since before I knew love existed…"
I only have a question and that is when Claire [ asks Tony if there were letters while he was in jail from women trying to take "her place" and he says "I even - " and then changes the subject. Does it have to do with Patricia getting fired?

I loved Phil and Eric they looked all bad boys checking their surroundings in paradise like eagles. BADASS!

This book should get to the big screen!