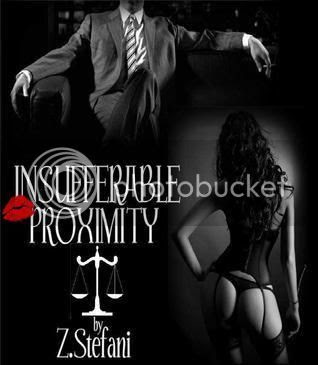 Someone is hell-bent on sabotaging Julian King.

Julian is a hot-shot lawyer and a natural born womanizer with an unnatural addiction to the opposite sex. He also happens to be the boss's son, which makes him a natural target. With a Rolodex filled with scorned women, a brother who loathes him and the competitors he defeated on his way to the top; there were plenty of people that would love to see him burn. But his money was on the person he despised most, his enemy Heaven Deville.


Heaven is an aggressive, ambitious, destructively-driven lawyer who HATES Julian King. The two stubborn lawyers were currently locked in a brutal battle for the coveted partnership position at the firm; and Heaven would do ANYTHING to prevent her arch rival from winning.


When Heaven goes too far Julian gives her two options- either he turns her in OR she has to willingly sign herself over to him for the next 30 days.

Soooo.. although I saw a couple of similarities from FSG or This man I really enjoyed it... What?!! nooo.... I LOVE IT.!!! Especially the fighting/banter/fighting/smart ass talk they kept until the end. This woman is a true heroine..


Julian King is a shiny top lawyer and happens to be the boss´s son, but he´s been away from the firm for almost a year while working in a case trial trying to prove his clients innocence. When he gets back his father makes a party in celebration of his younger child success in the case he just won, but also is celebrating that he hired a new attorney. When Julian meets Heaven he is impressed on how young and beautiful the woman is as well as the reputation she has (for winning all the cases she takes, because of how highly his father speaks of her). He can see her beauty behind the woman´s horrible attire and assumes she dresses like that to get respect for her talent instead of her looks and tries to seduce her right from the beginning but she cuts him off and leaves.

"Then he watched in total fascination
as she regained her composure".

"Prude". Angered by her words.
"Whore". She spat out before turning around and walk away.


Heaven Deville living in a brothel since birth and after having several shocking experiences along the years while living there, she grew up hating men and didn´t want to have anything to do with them. She went to college, studied to be a lawyer and went to work for an internship position at the best firm "The King law firm" on the east coast(Chan chan chan!!!!). When she finally meets Julian she is taken aback by his behavior in having such liberty to just take her hand and kiss it so intimately as she is well aware about all the gossip people spread of him in the office. They have a face to face altercation at the party where they were introduced by his father....and since then hell broke loose.

That being said, Heaven and Julian were very much alike, always seeking the same cases and going to each other throats to get what they wanted even making their co-workers and father/boss uncomfortable for the fights they got with each other in order to get the newest case. When a partnership position is available in he firm Ian King, Julian´s brother tells Heaven that his brothers proposition for the partnership was really good and he was ahead of her and was more likely he will succeed on winning over her. Heaven feels for the first time fear that this man will succeed to be partner instead of her just for being the boss´s son or for being really good at his work. She VERY CLEVERLY decides to sneak into his office after work hours to steal his proposition and damage his computer, so she get in his office, runs a killer virus into his machine and steals his paperwork.

He sends his secretary to go tell Heaven he needs to speak to her immediately and to go to his office and when she arrives he .......


I AM NOT GOING TO TELL YOU HOW HE FINDS OUT...WHICH IS THE REASON SHE SIGNS FOR 30 DAYS TO BE WITH HIM AT HIS DISPOSAL.

"I want you- every inch of you. I want you naked and on your knees before me, I want to stick my tongue in every orifice on your body, and I want to fuck you until you're begging me to stop."  WHAAAA?!!! NOW THAT´S A LINE......

This book was very scorching and steamy with lots of sex, some BDSM, possessiveness and too much love even when the main characters had it in front of them and weren´t aware it was there. I also felt uneasy by the way he treated her. I mean one thing is serving a sentence but he went beyond that and was messing around with her at work, not allowing her to do her job properly. People wasn´t supposed to know about them and what does he do?!!! He buys her sexy clothes to wear at work, they stop fighting in the office, he is constantly summoning her to his office, to take her bra, or panties, or touch her or whatever and because of his stupidness because that´s the only word it comes to my mind for him acting like that when he was told to stop messing around with girls at his father building, all the REAL issues start. I mean what is wrong with him, if he ratted her with his father and the police she would lose her job and probably go to jail and at the same time he kept putting her in compromising situations at work with the possibility of being exposed to her co-workers and that way she could lose her job too...


I really enjoyed the pace this book had but not the ending because everything went too fast and I really feel like it deserved a whole chapter.

I have so much more quotes I would like to share but... YOU WILL HAVE TO KEEP READING MY FRIENDS as I can only tell you one thing.. that was one of the most hilarious stories I have ever read or heard of :S. I mean the situation she puts herself into hahaha clever girl not so clever while trying to backstab his Nemesis. Even under the storm she remained shameless and brazen while admitting her fault (good girl.!). I laughed so hard and got so mad while reading this book. I just couldn´t stop reading. I kind of have love/hate/lust/love feelings for Julian.